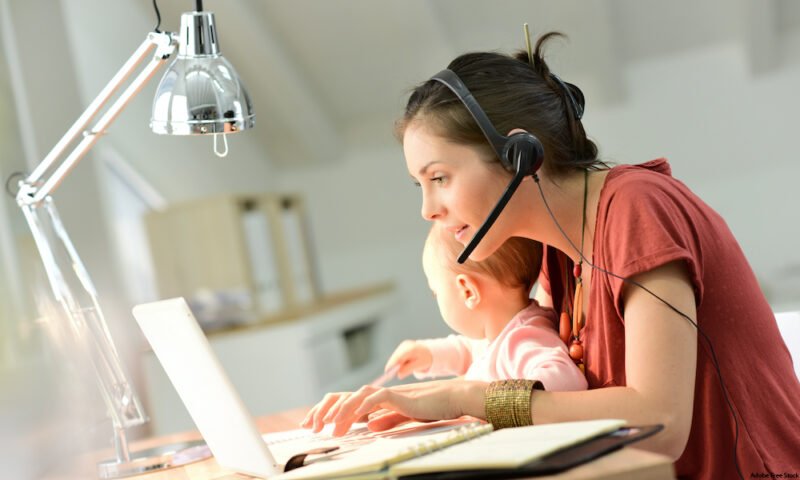 The United States is the only nation in its peer group (i.e. industrialized countries) that doesn’t guarantee paid maternity leave.

41 countries have a maternity leave mandate, so clearly, this would be a good start in the USA to support working parents.

Some states have taken matters into their own hands; however, overall, only 19% of employees have access to paid family leave in the USA. Not only has this probably contributed to a decline in the birth rate in the USA, but the lack of such a law also has a tendency to dominate conversations about how companies can help parents succeed.

This business blog post looks at how employers can go above and beyond basic maternity leave policies to support parents. Let’s take a look at family-friendly practices in the workplace that play a crucial role in gender balance and support, including:

Ditch The Nine To Five

Kids don’t know what a nine to five job is, and, more importantly, our school systems don’t seem to either. Do you know of a school that coordinates with the standard work hours of parents?

Working around childcare, being present for events like school plays and athletic events, and keeping their little ones home from school when they’re sick is just life. Employers need to be empathic to working parents’ responsibilities.

Showing empathy is letting an employee off the hook insofar as it doesn’t mean parents should be less accountable or responsible for achieving work tasks. Nor should parents be made to feel guilty for choosing to have a family and support the country’s ageing population.

Remote Working requires no travel time, and that’s a couple of hours every day that can be spent with the family or working. Plus, working from home is less stressful.

There are many positives for allowing your staff, particularly workers with young families, to work from home part of the week.

Many new mothers worry about coming back to work because they also have to figure out how to pump at the office on top of leaving their new baby.

Some of that is about scheduling, but often the more significant strain has to do with where they’ll pump and store milk – and that’s something they just shouldn’t have to worry about since employers are required to provide a private area for pumping.

Ideally, new moms shouldn’t have to even address this issue to make sure it’s covered. Simply make a mother’s room a standard part of your workplace architecture and let staff know it’s available if it’s ever something they need.

Companies can’t discriminate based on age, sex, sexual orientation, or disability, but just because there are specific legally protected categories doesn’t mean all families are treated equally.

Organizations can take steps to remedy this by ensuring that family leave – both maternity and paternity leave – are available to adoptive and foster parents.

Many already do this for adoptive parents, especially those adopting infants. Still, offering leave to foster parents who are settling a new child into their home is much less common and worth considering.

The United States lacks sufficient childcare infrastructure to care for all children who need daycare or after-school programs. What does exist is often both excessively expensive and poorly regulated. This is actually a leading reason that many families rely on a single income – because, in many cases, placing a child in daycare would eat up the second income entirely.

In recognition of this issue, a growing number of companies have begun offering various childcare supports, such as childcare subsidies and backup daycare services. This makes a huge difference for parents whose babysitter is sick and can’t work or struggle to find an affordable daycare slot to accommodate their kids.

For years, businesses were able to sidestep instituting family-friendly practices simply because it was expected that moms would stay home with their children for at least a few years after giving birth if they had been in the workforce before that.

However, such assumptions are rarely accurate anymore, to the extent that they ever were, to begin with.

Paid maternity and also paternity leave is a must in the USA. It is working in the 40 countries that have put the USA in the last place.  This can not be a comfortable position for any wealthy nation.

Businesses can also step up by adjusting office’s policies to modernize and invest in their workforce, which encourages loyalty and retention – that’s a win for everyone.

How UK Businesses Are Rebounding From Setbacks