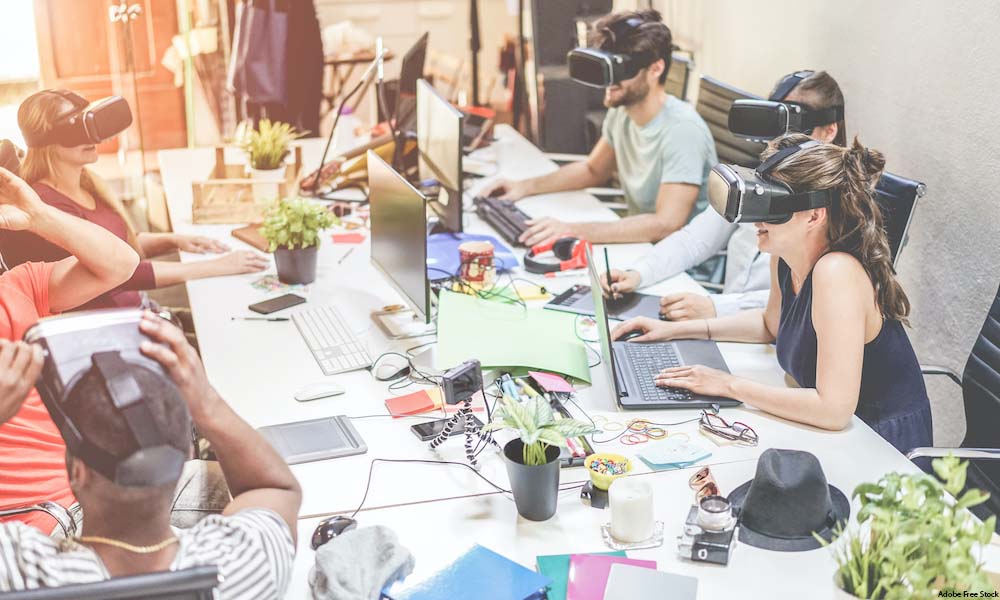 Have you been wondering about VR Eye Tracking technology lately? You’re not alone. We, too, have been intrigued by its development and how businesses use it for identification, privacy and security, and other uses.

This article looks at where it’s come from and how it works, plus the uses for eye tracking in VR.

Everything starts with eye contact. Whether you want to create a conversation, demonstrate your disagreement, or wink to an attractive person, even the slightest eye movements have thousands of meanings and undertones.

By the way, our discussion turns out to be one-sided because nobody looks back at you from the screen (except for text). Yet, are you sure? Many companies are currently experimenting with tracking technologies, so who knows whether our previous statement was true.

The same thing happens in the world of Virtual Reality (VR): eye-tracking technology is getting incredibly popular. Then, while putting Scotch tape on your laptop camera, we will tell you a little more about eye tracking in VR.

How Eye Tracking Became a Trend in VR

Long story short – nowadays, eye tracking has become a regular practice in many industries, ranging from human computing to gaming. However, how did it enter VR? Let’s figure it out together.

In 2014, a Tokyo-based startup organized the Kickstarter campaign to introduce Fove’s technology. After the successful implementation, the first eye-tracking VR headset was launched.

Although VR eye-tracking technology is still in an early stage of development, several industries have already benefited from this innovation. Here we’ve mentioned some of them:

It’s not a secret that the gaming industry aims at providing the most engaging and realistic experiences for users. From this standpoint, VR eye-tracking technology perfectly copes with such a challenge. By proposing an entirely new level of immersion that enables gamers to undergo life-like experiences within responsive virtual environments powered by gaze-based interactions.

A high level of accuracy is undeniably imperative, even if we’re talking about a virtual environment. For example, training and simulators for healthcare practitioners (primarily surgeons) require precision in every movement, including both hands and eyes actions. Hence, eye-tracking technology significantly improves activity by adding more fidelity to VR experiences.

In the 21-st century world, social distancing has become a regular practice instead of weirdness. Nevertheless, modern society is actively looking for new ways of communication to lessen the adverse impact of the global pandemic. Telepresence activities such as remote meetings and socializing in VR are a necessity in terms of current circumstances. Thanks to eye-tracking technology, virtual communication can become more natural due to expressive eye movements.

Exploring artificial spaces is always fascinating as a virtual world can make you feel like you’re in another dimension. At the same time, this virtual environment of endless possibilities can also make you feel confused and even lost. Fortunately, VR eye-tracking technology allows navigating your gaze, making your experiences even more pleasant and interactive.

Let’s look at the unleashing of the full potential of eye-tracking technology & VR. As we’ve already described some interesting use cases, it’s time to introduce this innovation’s multiple advantages to VR.

In a nutshell, this feature is based on human anatomy. Don’t worry, here you don’t have to remind your school classes about biology or something like that because we’ll explain it to you in clear and straightforward terms.
A small part of the retina, also known as the fovea, produces visual content in high resolution. On the contrary, peripheral vision, which means a picture outside the fixation point, is typically blurred. Following anatomy’s blueprint, foveated rendering works in the same way. It blurs everything outside the focus point and therefore creates the effect of real human vision.

Thanks to eye-tracking technology, it’s possible to recognize different individuals with HMDs (head-mounted displays). This feature may be extremely beneficial in some cases because it eliminates the need to select or authenticate particular users.

Similarly, a parallel can be drawn to unlocking the phone or securing door locks. The “eyes-only” data assures the highest security level by permitting the VR experience only to the right users.

When the headset’s lenses and displays are located in the optimal position, they not only guarantee perfect visual quality and increase comfort but also reduce eye strain.

There are a few devices that are compatible with eye-tracking technology including:

How Does It Work? The Process Described

First, this technology measures the distance between the pupil center and the reflection of the cornea.

When the eye moves, this distance varies according to the angle of the vision.

An invisible infrared light generates the reflection that enables cameras to recognize and track any changes in distances.

After all, a VR headset traces a virtual line from the direction of the user’s eyes into the virtual environment.

On A Final Note

Eye-tracking is an emerging innovation in the current consumer market, and this exclusive technology has promising potential in terms of VR. Needless to say, technology is rapidly evolving in the contemporary world, so eye tracking isn’t an exception.

Though this incredible technology has already captured society’s interest and attention, it undoubtedly has a lot of opportunities for improvement to impress us in the forthcoming years.

To sum up, we hope that we introduced all specificities of VR eye-tracking technology in the best way possible.

8 Reasons To Move Your Business To A Cloud ERP