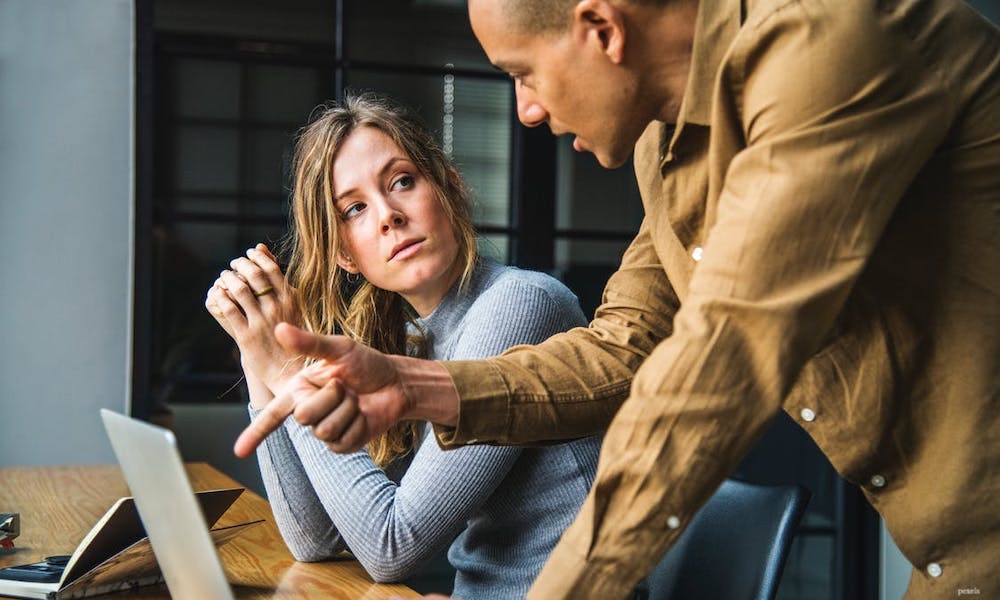 Most leaders focus on positive reinforcement actions to ensure good behavior.  However, there are cases where businesses have chosen to do the opposite and got it wrong!  We’re talking about actions that embarrass, humiliate and offend staff. For example, of course, no one should ever think of spanking underperformers. But wait, someone did.

What were they thinking? Don’t they have any common sense? Unfortunately, many folks out there have an uncommon sense – they do stuff most of us couldn’t even imagine. And it is their behavior that can keep an organizational leader up at night.

Later, I’ll give you my eight (8) tips for sleeping better at night.

You may have heard about this case a few years ago. Alarm One is a California-based home security system company, and one of its younger, under-supervised sales managers got out of hand. He instituted sales motivation sessions that went way too far.

This week, Chesley Quaide reported to our insurance group, “Motivation techniques used during the meetings included typical positive reinforcement, such as providing successful employees with bonuses.

However, negative reinforcement techniques were also sometimes utilized at the meetings, which included: forcing employees to sing in front of the group, pies in the face, feeding each other baby food, wearing diapers, and, of course, spankings. Employees who failed to meet goals or arrived to work late were bent over and spanked by co-workers on their buttocks with the company’s yard sign or the yard sign of an alarm company competitor. While the spankings occurred, other employees would yell (terrible) comments, specifically to the female employees.”

As ABC News reported, a jury awarded Janet Orlando, 53, $1.7 million for harassment. She was one of the sales supervisors who were frequently spanked and ridiculed. Other female workers were also awarded money, and several supervisors, including a woman, were also fined. (In an interesting technical ruling, the California Appeals Court later overturned the Harassment ruling primarily because the jury was instructed and because both men and women were spanked.)

What Can Leaders Do?

While this behavior is undoubtedly rare, other similar things do happen. We have a customer right now who is in the middle of a situation of lesser drama but still disturbing.

Fortunately, there are eight things leaders can do to protect good employees and their organizations.

When in doubt, don’t hire

As Jim Collins taught us in Good to Great, “when in doubt, don’t.” If you see or hear anything during applicant interviews that make you doubt the person would be a good fit for your company, don’t hire them. This includes making sure your hiring process is comprehensive.

In some of these cases, reasonable doubt is raised about whether senior leaders modeled appropriate behavior for junior leaders. This includes being absentee or invisible.

Many fast-growing, small and mid-sized companies just don’t take the time to train their supervisors. So what happens? The new supervisors improvise based on their life experiences. You should make sure new supervisors learn how to effectively and legally supervise others.

If you leave untrained supervisors unsupervised, what do you think will happen? Answer – anything and everything. While it is true if you hire the right person, you are more likely to have fewer crazy things, you are still expected to have stuff happen. Your supervisors should have regular telephone and face-to-face interaction and guidance.

Your business must follow the laws related to harassment. Your company needs policies including training on how to avoid harassment that support the company culture that resonates the best with customers and staff.

Train all employees in person about harassment

The laws generally only require employers to make employees aware of their policies. For example, employees could just read the policy and sign an acknowledgment form.

However, we advise companies to do in-person training annually because you might learn more about what is happening during the training and can address the behavior then.

This is one of the biggest mistakes leaders make – they don’t thoroughly investigate complaints. This inaction is baffling because this is the best way for a company to reduce its liability. The law says that a company is usually only liable for the poor behavior of its people when it neglects to take action once it learns about it.

If the investigation determines that your employee(s) misbehaved, you must take disciplinary action based on your policy. If you don’t, you could be liable for damages if the damaged employee makes a legal claim.

As an organizational leader, you can’t be entirely sure what your people are doing every day (in our case, we have about 650 team members working today.) But if you follow these eight steps, at least you’re more likely to have a better night’s sleep.

The Kennedy and Lincoln Coincidences

Here and Now Lessons from Lorne Michaels and Willie Nelson