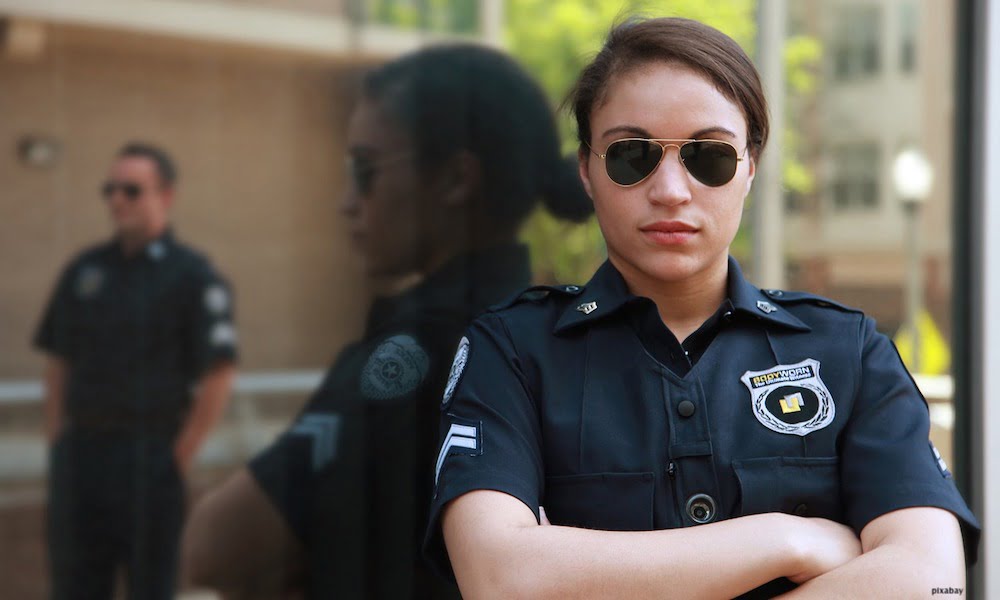 Russian bots, hacked emails, stolen identities, the 24 news cycle is awash with stories of digital security breaches. And the concerns over these breaches is absolutely justified. But securing your business against digital attacks cannot be your only security focus. Terrorism, corporate spying and physical attacks on staff are all major concerns for businesses of all sizes and in all industries, and it’s important not to forget about these things when looking at how to keep your company  and staff safe.

A growing number of companies and government entities are turning to body-worn cameras (BWCs) as a solution to the physical threats their business and staff face. And there’s a growing body of evidence which suggests BWCs are having a positive impact on more than just physical safety.

What are Body-Worn Cameras and Where Did They Come From?

BWCs are nothing new. They first came into the public consciousness with Google’s brief flirtation with Google Glasses; a device which could live stream video from a camera within the glasses. But police in the UK have been using BWCs to record their daily activities as far back as the mid-2000s. The initial trials were deemed successful enough for cameras to be issued to over 22,000 Met frontline officers in 2016.

The tipping point for BWCs in America came in August 2014 when the unarmed Michael Brown was shot and killed in Ferguson, Missouri by police officer Darren Wilson. Prior to the shooting only a few dozen smaller departments had implemented body-worn camera programs. By September 2015 the US Department of Justice had released $23 million to 73 agencies in 32 states to expand the use of body-worn cameras. Washington, D.C, New York and Los Angeles were among the first to start their own pilot programs.

A study published in September 2014 by researchers at the University of Cambridge and RAND Europe showed that body cameras had helped slash the number of use-of-force incidents that police were involved in.

The experiment showed that the technology is perhaps most effective at actually preventing escalation during police-public interactions, whether that’s abusive behaviour towards police or unnecessary use-of-force by police. According to the researchers, the knowledge that events were being recorded during interactions with police created a kind of self-awareness in all participants. Compared with the previous year, the number of complaints brought against police officers dropped by 87%. But the study also revealed a 59% reduction in use-of-force by officers wearing cameras, indicating that the cameras also had a positive effect on the behaviour of the officer(s) involved.

This self-awareness is the critical component that turns BWCs into a preventative measure. It causes individuals to modify their behaviour in response to an awareness of ‘third-party’ surveillance by cameras. This helped to create a safer working environment and also led to a reduction in the number of sick days used for recovery from injuries and stress sustained because of a violent attack.

Adoption by other sectors

Police forces across the US and UK have been quick to adopt body-worn cameras, seeing them as a way to build community trust, provide evidence following confrontations with citizens and hold officers accountable. This has lead to many other sectors utilising BWCs for a number of different reasons.

In Florida, for example, BWCs are used by parking attendants, firefighters and building inspectors. In Iowa, they’re used by principals and assistant principals during the school year to record their interactions with staff and students. In Denbighshire, UK, they’re used by bailiffs and environmental crime enforcement officers. The reason cited by many of these groups is that when people find out they’re being recorded, their behaviour changes for the better.

Workers in the NHS have also been utilising BWCs after seeing a spike in assaults in recent years. Recent figures show that 15% of NHS workers have suffered physical violence from patients or their families in the past year. Official figures revealed there were an average of 154 assaults every day in England, but a union spokesman said the true figure was closer to 200 a day.

As a result, many NHS facilities are turning to BWCs to help protect their staff and patients, with a study carried out last year at an inpatient mental health unit in Northampton highlighting the benefits of wearing BWCs in a clinical setting.

The study at Berrywood Hospital saw clinical staff wear body cameras for every response to alarms on the unit. The outcome was that both staff and patients said they felt safer, and the number of violent incidents and the use of restraints decreased compared to the same period in the previous year.

Public entities across the US and UK have been quick to adopt body-worn cameras, seeing them as a way to build community trust, provide evidence following confrontations with citizens and hold personnel accountable. But despite some successful adoptions, and the evident benefits of using body-worn cameras, private enterprises have been slow to embrace them. This can largely be attributed to the following causes:

The initial cost of equipping your personnel with BWCs is not insignificant and private firms do not have access to some of the grant money that is available to public agencies. As the technology develops, the cost of the cameras is dropping but initial outlays can still be too much for some firms to justify.

There is also the cost of video storage and management which can be problematic for some firms. Typically, body camera footage is uploaded at the end of the shift to an in-house server or an external cloud server. It’s vitally important that any footage captured is stored in a secure, accessible and reliable Digital Evidence Management platform. But storing all this video data onsite or in the cloud can be expensive. To help companies with this, some BWC providers, like Hytera with their VM685 bodycam, have tiered options offering different features depending on the number of staff and locations, which may provide some flexibility on price.

Using the footage provided by incident recordings for training purposes can be invaluable when it comes to training staff on the best way to deal with real life situations. It can also provide real insight for new staff on the kind of situations they may end up facing. However, firms will also need to create their own policies and train staff to adhere to them. This will include things like when to turn the camera on, when to let people know you’re recording and how to upload the recording to the server. This level of training can be time consuming and costly.

Privacy concerns are a major consideration for firms looking to adopt body-worn cameras. A person recorded by a body camera may attempt to sue the business employing the staff member for invasion of privacy. Many commercial general liability policies provide this coverage, so ask your coverage provider if this will affect the invasion of privacy liability. Whether this is applicable also depends on whether or not the video footage contains sound as different laws can apply to video without audio.

To limit this exposure, it’s a good idea for firms to check with local law enforcement and legal counsel before equipping staff with cameras. Firms will also need to put procedures in place to prevent videos from being copied and shared on social media.

Having BWCs can also help to protect firms from lawsuits. With the evidence provided by body cameras, false and frivolous claims can be more easily dismissed. Cases of misconduct can also be dealt with a lot faster.

Are body-worn cameras right for your business?

There are certainly a number of benefits to using BWCs. But it’s important to consider the roll of they would play in your organisation before making a decision.

In cases where your staff’s job involves interacting with people who may become agitated or aggressive due to the situation, then body cameras can be of benefit to both the staff member and the employer. Someone who works in vehicle repossession, for example, may greatly benefit from having a BWC as it can improve behaviour and provide visual evidence of any conflicts that may arise. The BWC, coupled with signs about their existence, can act as a visual deterrent to stop an incident before it is even committed. If the staff member is part of a larger team, BWCs are also available with microphones that can be used to communicate efficiently from the device.

A night watchman, on the other hand, is less likely to need to a BWC as their interactions with others that would require recording are likely to be few and far between.

BWC’s – The present and the future

Body-worn cameras have become more and more commonplace with law enforcement around the world. And gradually other sectors, both public and private, have caught up. As the technology becomes cheaper and governments agree on legislation, some of the old stumbling blocks will erode, potentially leading to greater uptake from private firms.

Public perception of the devices is also changing as they become more accepted within society. However, this may increase the risk that, as the technology spreads, this could present more opportunities for people to misuse it. The policies and restrictions around when and how police forces use cameras is clear. For the public, it is less tightly regulated.

Whatever the future holds, one thing we can be sure of is that it will all be caught on film.

The Importance of Identifying Risks and How to Protect Your Business