A report recently from Silicon Alley Insider reports that “of all the smartphones sold in Q3, 44% of them ran Android. Meanwhile, only 22% ran RIM and 23% were iPhones.” It appears in the closing months of 2010 Android is going to continue its dominance. A recent August report from Neilson says that Android is now the most popular operating system among people who bought cell-phones in the past six phones. Blackberry RIM and Apple iOS are now in a dogfight for second place. 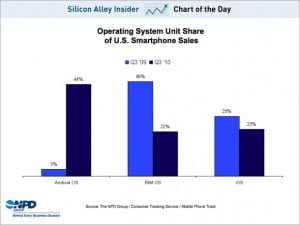 The real question this data poses is what it means for developers? Will Apple continue to decline, or have they given up some of their development growth to the iPad? It’s possible as tablet computers become more and more mainstream that Apple will experience some developer cannibalization in their App Store. However, Apple could see improvements in the market if the Wall Street Journal’s murmurs will truly produce a Verizon iPhone. One thing is for sure, the holiday season is going to be fun to watch this year!

Choosing Ready Made Themes and Templates Over Custom Made Web Designs